Chronic diseases represent over 60% of annual deaths worldwide, with leading causes being cardiovascular disorders, diabetes, cancers and chronic respiratory diseases. While non-communicable diseases were the cause of 78% of deaths in Latin America in 2008, the World Health Organization estimates that this will rise to approximately 84% of deaths by 2030.

Obesity is at the heart of the discussion around these deadly diseases as it is a trigger for chronic health conditions such as diabetes, high blood pressure, and high cholesterol, while also increasing the likelihood of the onset of heart disease, strokes, certain forms of cancer and respiratory and gastrointestinal diseases, among others. Obesity is estimated to be responsible for between 1%-3% of total health expenditures in most countries, while accounting for a whopping 5%-10% in the United States.2

Hence the talk of global obesity “epidemic”, since it affects both developed economies and emerging markets indiscriminately. While a correlation exists between obesity, income and education—wherein households with higher education and those with greater income tend to present a lower likelihood of obesity—countries like Mexico and the United States have a homogenous rate of obesity across all segments of the population, regardless of income or education. A significant concern is that no OECD country has seen a reversal of this trend since the obesity epidemic began.

Mexico has the highest obesity growth rate in the world and has the highest proportion of child obesity and the second highest proportion of adult obesity globally. In response to this, in 2013 the Mexican government launched one of the most comprehensive strategies to address the problem, including awareness-raising, healthcare technologies for physicians, regulatory measures affecting food advertising, labeling of processed food, as well as taxation of unhealthy foods. The results of such a campaign will likely increase awareness—and thus early detection—of obesity.

Chronic disease prevention will drive growth in certain healthcare segments Prevention remains a vast area of opportunity throughout Latin America, a region typically characterized by diets heavy in calories, people who exercise insufficiently, and sedentary lifestyles. In this area, food manufacturers can introduce healthier items and communicate more responsibly with consumers. For example, in Mexico Coca-Cola promotes the need to exercise and do sports in every commercial, using the “Haz deporte” slogan (“work out”). Being transparent with consumers and promoting strong values is a way for brands to distinguish themselves from the masses and earn customer loyalty by relating to customers on an emotional level. Pharmaceutical companies, typically associated with cutthroat practices and big profits, can also benefit from stronger ties to prevention-related campaigns—both from a brand visibility as well as brand reputation standpoint.

Meanwhile, Latin America is expected to become the region with the highest rate of cancer death worldwide. Estimates show that 1 million people will succumb to cancer annually by 2030, with 1.7 million cases being diagnosed annually. Improving access to healthcare and the quality of detection methods will likely be an area of future growth. This trend has significant implications: 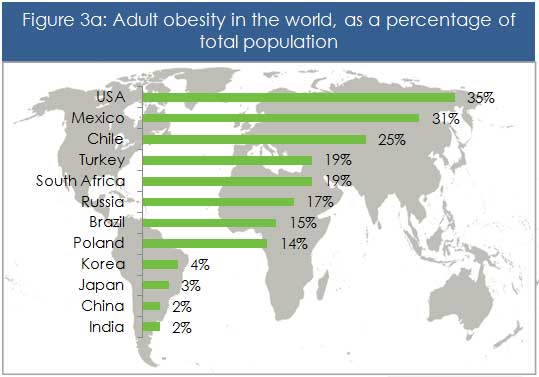 Source: Global Health Intelligence analysis based on information from the OECD Health
Data 2010, and WHO Infobase.

It is estimated that diabetes currently affects over 15 million people in Latin America, a number that will reach 20 million by 2023.

Demand in these healthcare segments will boost local manufacturing of medication, which is expected to keep growing, placing further strain on international laboratories. Given their limited R&D budgets, local manufacturers will continue to focus on the production of generics, birth control hormones, non-narcotic analgesics, antidepressants and anti-rheumatics.

Given this landscape, some global players may seek to increase their local presence. This may come in the form of direct market entry or through partnerships with well-established distributors and medical technology integrators. Time-to-market will remain a factor of consideration in this competitive marketplace, for which local expertise will help in the understanding of channel challenges such as solutions integrations, management of domestic production costs and regulatory risks, as well as the capitalization from distribution synergies within already existing networks.