Latin America pharmaceutical sales to grow 12% per year through 2017

With pharmaceutical sales growing at 3% per year in mature markets such as North America, Europe and Japan, the successful drug manufacturers of tomorrow will continue to look to emerging markets to fuel their growth. Latin America and Asia stand out as the principal growth regions, each having expanded an average of 14% per year between 2008 and 2012 and expected to maintain an average pace of 12% per year through 2017 (see Figure 2a).

The drivers of sustained growth in pharmaceutical sales throughout Latin America
Urbanization, greater access to education and a larger proportion of women in the workforce are helping to bolster income levels throughout Latin America, thus driving the expansion of pharmaceutical sales as people begin to spend more on healthcare beyond basic necessities. Between 2002 and 2009, Latin America’s middle class grew by 60 million people (whereas in Asia, by comparison, the middle class grew by 49 million).

1. First, Consumption patterns will continue to lean towards an increased use of generics throughout the region, a trend driven by governments seeking to broaden healthcare access at reduced costs. Local producers of generic drugs are becoming the driving force of the pharmaceutical market, manufacturing branded products as well as private labels for pharmacy chains. Local producers are growing at a staggering 28% per year enabling generics to be sold in domestic markets 70% more economically than their patented counterparts.

2. The consolidation of pharmacies and the continued expansion of retail/supermarket chains will accentuate this trend moving forward. A study conducted by Nadro, a Mexican medical wholesaler, indicates that pharmacy chains and supermarkets went from controlling 69% of Mexican pharmaceutical sales in 2007 to 88% in 2014, reducing the participation of independent owners. Wal-Mart’s dabbling in the pharmacy market in Mexico and Femsa’s acquisition of Mexican local pharmacy chains Farmacias Yza and Farmacias FM Moderna are testimony to how modern retail chains are taking hold of pharmaceutical distribution. Consolidation of the pharmaceutical retail segment will lead to fewer potential distributors —of greater gross revenue— for drug and over-the-counter manufacturers, thus simplifying the sales process and simultaneously increasing the reliance on a few retailers. This will lead to a number of consequences:

a. Consolidation will translate into a severe disruption of longstanding practices by established product manufacturers, who have made the most of the inefficiencies of a fragmented marketplace. More aggressive negotiations between retailers and their suppliers are expected to ensue, posing a potential risk to unsuspecting suppliers.

b. The growth of pharmacy chains will also squeeze wholesale margins forcing this segment to reinvent itself. Thanks to their vast negotiation powers, large retailers may seek to bypass this segment altogether.

3. Meanwhile, private health insurance is gaining traction and the market for “middle income” private clinics and hospitals is booming. As this happens, the market for medical devices and 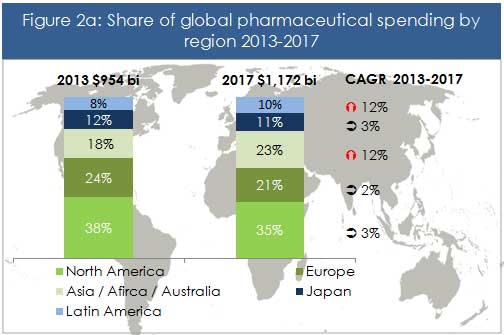 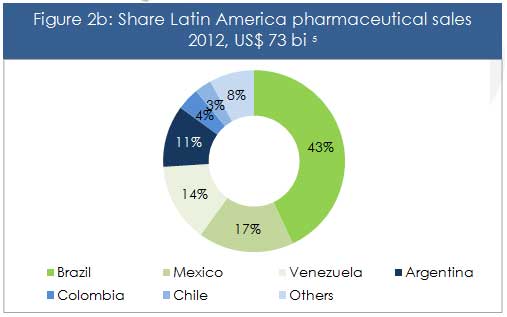 Colombia and Peru present strong growth prospects, albeit from a small base. Chile maintains the characteristics of a more mature market, with consistent and stable growth. In contrast, the economic woes and inflationary pressures currently besetting countries such as Argentina and Venezuela are causing varying degrees of distortion to the market values, pricing and margins in these countries. As a result, it is difficult to predict how these markets will fare, though the picture looks grimmer than for their neighbors.

Smart money will continue to look at Brazil and Mexico as the region’s pillars, seeking additional growth from rising markets such as Colombia and Peru.