As healthcare expenditures continue to expand, governments, insurers, consumers and health systems are coming under ever-greater pressure to curb costs. Latin American governments are acutely aware of this trend as healthcare expenditures in the region are expected to grow by 6.8% per year in 2014-2017, compared to a global annual average of 5.3% over the same period. Against this backdrop, two market forces will drive the growth of the generic drugs market in the region in the coming years.

On the one hand, the expiration of 46 patents in the United States will invite greater competition to provide low-cost alternatives for many popular drugs. Generics are on average 50%-75% more economical than their patented counterparts and have become popular in countries where consumers are more price-conscious such as Venezuela and Argentina, among others.

On the other hand, generics have become the option of choice for governments who subsidize heavily the health system, notably Brazil, Argentina and Colombia. Insurance companies and governments are exercising tighter control over the type of drugs administered to patients.  In most cases, governments in Latin America promote the use of generics primarily through legislation. In the case of Chile, at the beginning of 2014, congress approved a bill that forces doctors to write prescriptions both with the patent and generic name. The bill also forced pharmacies to always ensure generics are available to the public.

As a result of government support and more price-conscious consumers, the use of generics is expected to increase 16% per year in Latin America, reaching 65% of total drug sales by 2016.

While generics offer medical distributors and pharmacies the opportunity to increase their sales volumes, the profit margins remain much lower than for patented drugs. So far the biggest winners have been local producers of generic drugs as well as large pharmacy and retail chains. 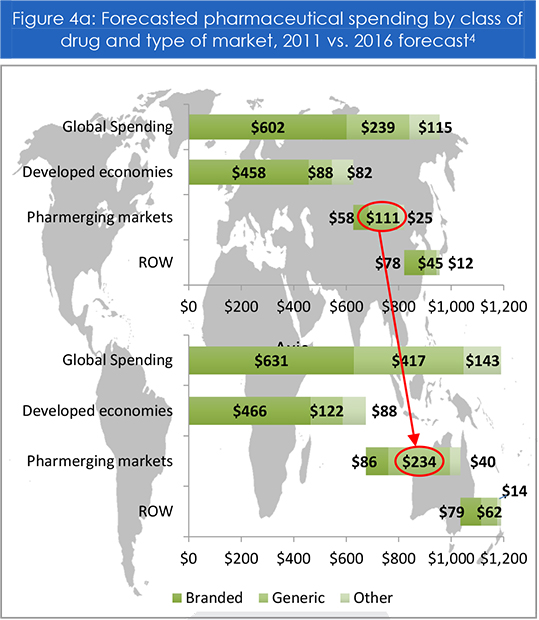