Precision, efficiency, less invasive procedures and greater quality for patients: these are the promises made by the ever more technological medical equipment acquired by Brazilian hospitals. Whether they are for surgical, diagnostic or therapeutic purposes – or even for bringing diagnostic capacity closer to treatment, such as modern endoscopy machines – these devices are also of great help to medical teams, who can achieve good results quickly and safely.

We list below some of the most modern equipment that benchmark hospitals in Brazil such as A.C.Camargo Cancer Center and Hospital Alemão Oswaldo Cruz have recently acquired:

This microscope, which is indicated for head and neck as well as central nervous system surgery, can also be used in trauma surgery, reconstructive plastic surgery, and maxillofacial surgery as a less invasive procedure. The device comes with technology that enables the surgeon to manage the equipment in a 3D system and from different angles, with greater contrast in tissue differentiation. Devices such as the Curve Neuronavigation System enables applications that make it possible to draw over lesions and fuse images to be downloaded, helping surgeons to map out the best strategy for each procedure.

Adopted by benchmark cancer treatment hospitals such as the A.C.Camargo Cancer Center and Hospital Alemão Oswaldo Cruz, linear accelerators such as the Elekta Versa HD and Varian’s Halcyon™ can increase treatment speed, safety and efficacy. By using modern high-definition imaging techniques, they deliver higher doses of radiation to the tumor, minimizing the doses received by the surrounding normal tissues and reducing side effects. These devices are fitted with cutting-edge technology and carry out radiotherapy treatment with a high level of precision and assertiveness, reducing the number of sessions and, therefore, the patient’s exposure to radiation.

Several Brazilian hospitals – including the Hospital de Clínicas da Unicamp and Hospital Alemão Oswaldo Cruz – have acquired new sets of surgical lighting systems that, with their combination of lights, are able to show the ideal depth for the surgeon performing the intervention. These devices can also be adjusted for each type of surgical lighting need. The more modern pieces of equipment, such as STERIS Corporation’s XLED, use state-of-the-art LED technology to improve surgical field resolution, enabling a more efficient and assertive performance, especially in delicate surgeries, and thus more safety and comfort for patients.

Intubation, which is considered to be an invasive procedure, has benefited from technology to provide patients with greater comfort and doctors with greater precision. Difficult airway intubation equipment, such as Karl Storz’s C-MAC® – which Hospital Alemão Oswaldo Cruz has adopted in both operating rooms and intensive care units, as well as for other treatments and diagnoses – comes with a camera at the end that is connected to an external monitor, helping the doctor to perform a safer intubation procedure and avoiding injury to the patient. 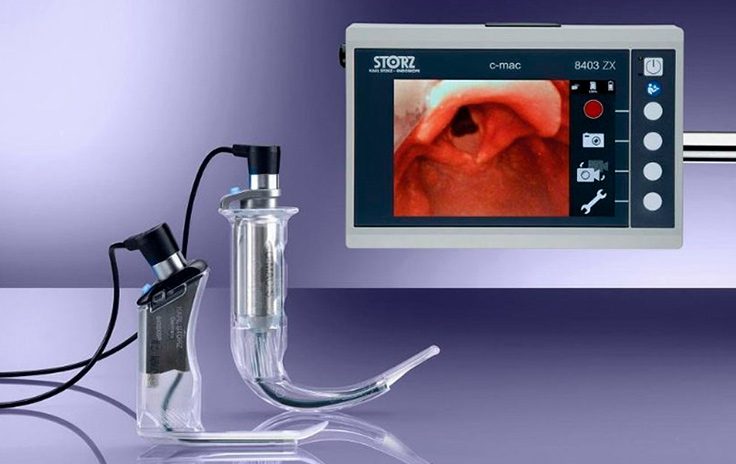 Prostate biopsy, which is a very common, routine procedure in hospitals, has been further developed to facilitate this intervention, ensuring greater patient safety and reducing complications such as infection and bleeding. The most up-to-date devices come with software that enables the biopsy to be performed accurately on a small lesion, with the association of resonance or ultrasound images. This allows the doctor to carry out the procedure precisely, removing exactly the fragment required.