As China shifts its focus towards domestic consumption, it has unfavorably impacted global commodity trading.1 The currency depreciation experienced throughout Latin America reflects falling demand for their export commodities and is putting the region’s long-established dependency on Chinese demand under greater scrutiny (see graph). The region’s economic stagnation is expected to linger through 2018 as regional economies are expect to post only modest GDP growth of less than 3% — well below the robust expansion seen from 2003- 2012.2

Slow growth and weaker currencies leave the region at a disadvantage in regard to dollar-denominated goods. With the majority of medical devices being imported into Latin America, manufacturers and distributors must revisit their pricing regularly in order to ensure they remain both competitive and profitable. Meanwhile, healthcare systems address cost increases through “rearview-mirror” budget planning, making for a challenging balancing act. Industry and government institutions are each defending their respective interests, often resulting in a tug-of-war between public spending and costcutting initiatives, as was the case with Brazil’s healthcare budget throughout 2015.3

Though the economic instability of the region will continue to constrain public health systems, Latin America’s total healthcare expenditure is expected to reach 7.7% of GDP by 2017.4 Future growth will depend on the private sector’s flexibility, and companies’ ability to cater to individuals seeking healthcare outside the scope of the public sector.

With private expenditure representing 48% and 57% of the Brazilian and Mexican healthcare markets respectively, these are the largest private markets in which to thrive.5-7 Mexico’s rebound since its economic slump in 2011 reflects the vitality of healthcare markets. Mexico’s healthcare spending grew by nearly 10% in 2012, a direct result of the expanding private sector.9 Brazil’s novel policy change in 2015 to open private hospitals to foreign investment also exemplifies the need for expanded healthcare provision and the role of the private sector in meeting this need. Other countries have also seen strong growth within the private sector, notably Chile, Argentina, and Nicaragua.7-9

As the second largest and most dynamic medical device manufacturer in Latin America, Mexico is also showing promise. Thanks to its geographical proximity to the U.S. and its lower manufacturing costs, the country has become the fifth largest exporter of medical devices and remains an enticing choice for mid-sized medical device companies wanting to establish operation in the region. 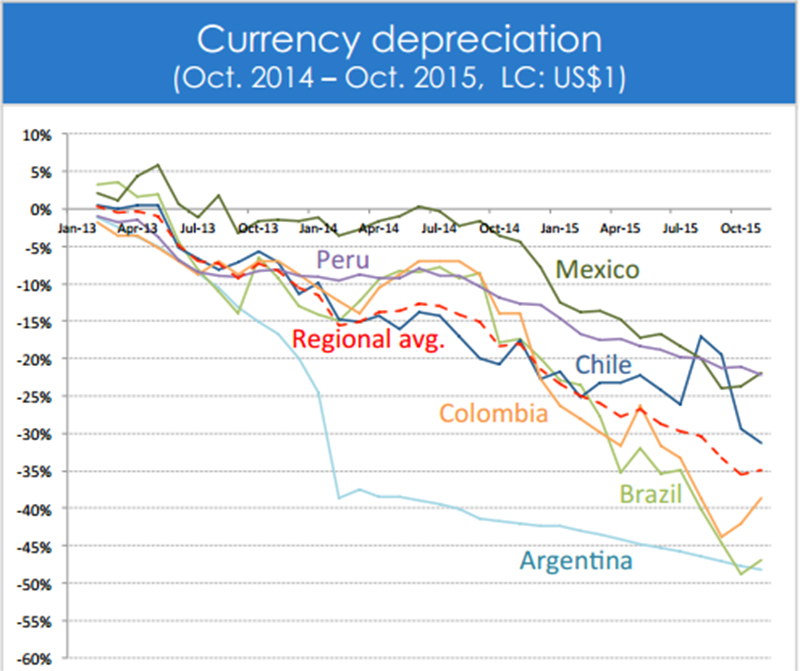 Source: Global Health Intelligence based on data from xe.com

Opportunities lie in providing cost-effective solutions that help public and private sector healthcare providers keep their costs under control. On the capital equipment side, this may prompt a move towards refurbished or pre-owned equipment backed by a manufacturer warranty; or the extension of maintenance contracts for distributors and integrators. Local manufacturing and contract manufacturing may be an option for certain medical device manufacturers seeking to shift their costs away from the dollar. Increased competition from “budget” solutions will arise, affecting established brands in capital equipment, devices and consumables.

Another promising niche are markets geared towards the elderly and chronic disease management, which have seen growing demand, especially for services and products that cater to the new patient-centric philosophy. Sub-segments include mHealth solutions, telemedicine, and prevention, which aim to both reach more patients and be efficient with resources. Given budgetary pressures, public healthcare institutions will be more deliberate about their spending on healthcare. Certain countries may even need to streamline their healthcare systems, finding efficiencies and new ways to collaborate with the private sector.