The obesity problem: The fat that is hard to shed

Now recognized as a worldwide epidemic, obesity is responsible for negative effects not just health-wise but also from a cultural and social standpoint – and Latin America is no exception. Obesity is the fastest rising non-communicable disease (NCD) in the world, and now afflicts over 56% of adults in Latin America — well above the global average of 34%.1 As a leading indicator of future health problems, the spread of obesity cannot go unmanaged. Populations stand to gain long-term health benefits that protect them against the burden of chronic diseases.

Eating habits, globalization, stress, and sedentary lifestyles are the root causes for the prevalence of obesity in Latin America. Drastic dietary changes are the most obvious sign of the epidemic across the region. Following in the footsteps of North American eating habits, the sale of ultra-processed foods grew by 48% between 2000 and 2013.2 Sedentary lifestyles are due to the growing work constraints and busy schedules associated with urbanization, as well as the lack of space for physical activity. The double burden of malnutrition creates the unique situation where nutritional deficiency exists alongside obesity. Food insecurities and low incomes propel this double burden, such as in Mexico and Argentina.3

Latin America is home to some of the highest obesity rates in the world. Mexico, most famously, surpassed the U.S. in 2013 as the world’s most obese country. It is expected that Mexico will continue to see a steady rise in its obese population given the high proportion of its population considered overweight. In 2015, over 70% of Mexico’s overall population and 57% of children were considered overweight.4 Other Latin American countries such as Venezuela, Argentina and Chile possess similar rates.5 This places an enormous burden on the healthcare sector, as obesity is a precursor to more severe health issues.

The same high-fat and sodium diets that lead to higher body mass indices also cause plaque buildup, hypertension, inefficient insulin uptake, and musculoskeletal conditions.6 Though one of the easier risk factors to manage, the conditions arising as a result of obesity place a huge strain on Latin America’s healthcare systems, most notably in the form of cardiovascular diseases and diabetes.

Products that can monitor, record and display health statistics such as blood pressure, glucose levels, calories, and weight can influence behavior and reverse the effect of harmful non- 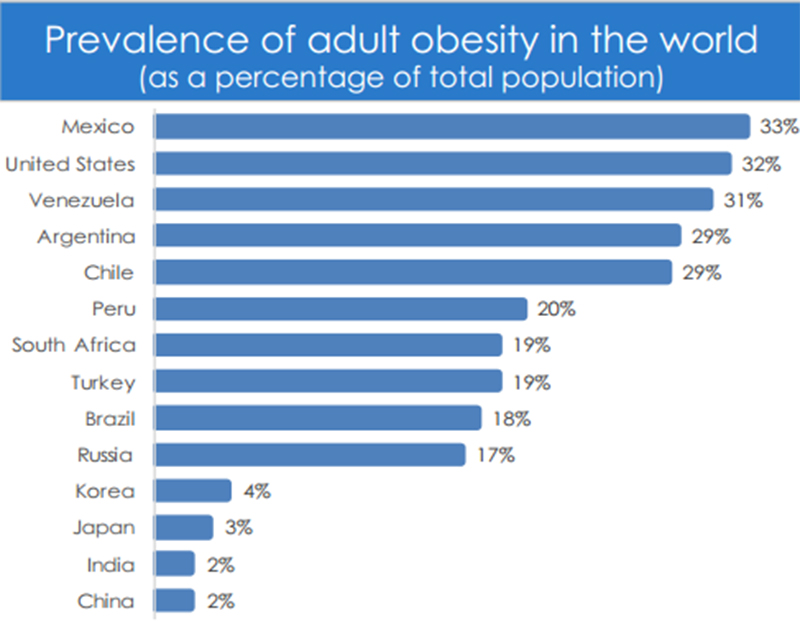 Source: GHI Analysis based WHO Infobase, OECD Health 2014, and foreignpolicy.com

communicable diseases before complications arise. These products can promote prevention through awareness by demonstrating the gradual consequences of harmful diets, which otherwise go unnoticed. With healthcare mobility solutions expected to grow by 25-30% annually through 2020, suppliers stand to benefit from introducing products such as wearables and smartphone applications, among others.7

The demand for these medical devices and other products in this niche are part of a much larger trend toward patient-centric healthcare.6 By empowering individuals to hold themselves accountable for managing their personal health, there is potential for much greater knowledge dissemination (e.g., nutrition education) as well as effective incentives for behavior change (e.g., weight loss). Products that enable individuals to micromanage their own health indicators (e.g., achieving a target heart rate) make it easier to detect progress — and relapses. The greater prize of these mobile solutions is the patient adherence and the vast amounts of data resulting from constant communication between healthcare providers and patients.

Effective health management across large populations is not far off. There are opportunities for both public and private institutions to collaborate in this space, whether via awareness campaigns, wearable devices, integration of electronic medical records (EMR) or other solutions.

Addressing the overweight and obese populations of Latin America goes hand in hand with efforts to prevent chronic diseases. For instance, having a family reorganize their budget for food purchases and make the time for physical activity is less costly than the medication required for treating a chronic disease or the emergency care that sometimes results from it. This sort of preventative care against obesity could ease the burden on Latin America’s healthcare systems.