Illicit business practices: The burden of corruption on healthcare systems

Unethical business practices have a heavy influence on the healthcare systems of Latin America. Theft, bribery and extortion have led to monetary losses in the billions. According to Transparency International’s 2014 Corruption Perception Index, the extent of the damage is severe enough to classify two-thirds of the region’s 31 countries alongside the world’s most corrupt nations.1 And yet the region can ill afford anything that would further constrain its healthcare system by limiting available resources, lowering the effectiveness and efficiency of services, or lowering quality of overall care. Even though engaging in corruption presents significant risks to companies – with the risk of a tarnished reputation and billion-dollar corporate fines among the most severe, unethical behavior will continue to play a role in Latin America.

“I have yet to hear of one country in Latin America that does not have an issue with the role of corruption.”
Leading medical device manufacturer

Much of the corruption stems from political figures and unethical behavior in the public sector. The prevalence of state-owned or state-controlled healthcare institutions have led to compliance challenges regarding anti-bribery laws.

Corruption goes beyond bribes and kickbacks. There are cases of individuals and entities often billing the government for services that were never rendered or even selling expired medications in altered packages.4 In Ecuador, such behavior has become a major issue for the healthcare system. Guayaquil’s Teodoro Maldonado Carbo Hospital 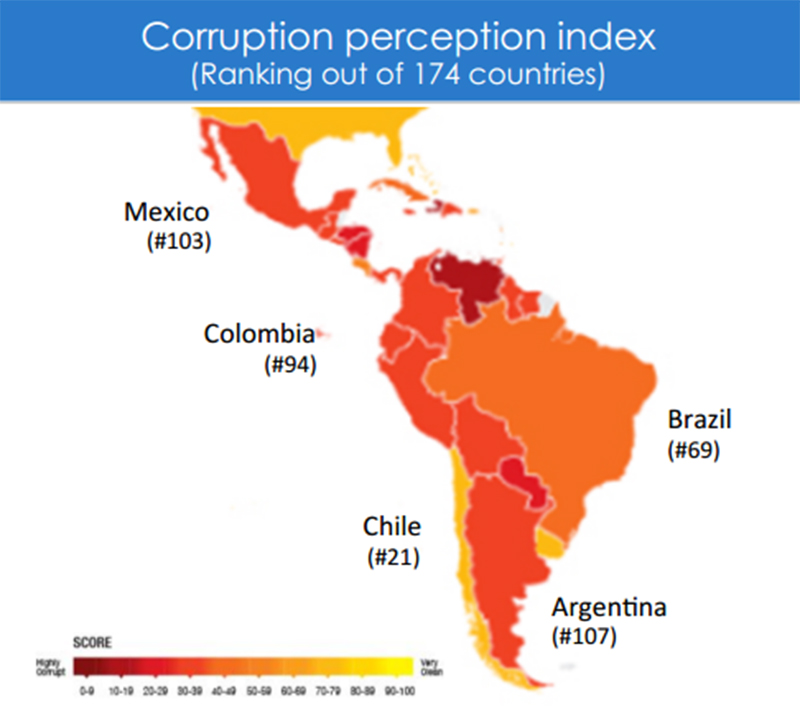 has been one such source of corruption where dozens of tunnels have been used to smuggle medicines out of the hospital for illicit sale.5
Even Brazil’s image has been stained by corruption as the Petrobras scandal comes to light, involving both public and private individuals in a multi-million dollar affair that appears to lead as high as the Presidential Office.

Impunity at the top enables corruption to flourish. As new leaders take office, they have an opportunity to change long-established practices. They must look towards anti-corruption initiatives to reduce the impact of unethical behavior in the region. The priority for improving healthcare management systems is to increase transparency. There is an opportunity for international agencies and civil society to come together in the fight against these unethical practices.

Transparency and accountability must increase if the role of corruption is to diminish.